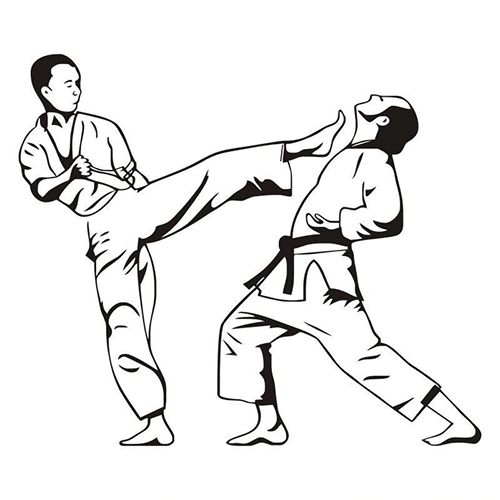 Duration between the exams for belts

The philosophy of belts (Their meanings in short form)

8Q – white belt – Student is like white paper, like clear sky. What you write to this,
how you color it, it’ll develop with its way. Students are also like this.
7Q – dark blue belt (or blue) – Students are like blue clouds on the clear sky. It
shows that student’s already perceived something in “Jiyutaido”. He’s already
created his own little source of knowledge like blue clouds on the clear white sky.
6Q – yellow belt – It shows the student’s got new energies and been more active.
In yellow belt the student shows how he strives for victory believing in himself.
When the Sun rises nature is filled with enegy and glee. All nature comes to life.
5Q – green belt – The student gets energy from knowledge like the nature gets
from the Sun. He becomes more active, improves his techniques and knowledge. It
seems like the nature is covered with greenness and comes to life.
4Q – brown belt –The student has to test his knowledge in competitions working
on his own techniques to improve his knowledge like the nature needs soil to be
covered with greenness.
3Q – brown-black line – Fighter begins to share more time for knowledge to
increase his strength like human fertilises soil to firm it (to psychological
preparation, philosophy and medical sciences).
2Q – black belt – Every day has its night. Like growing old and becoming wise.
Wisdom comes with ages. Because human lives seeing every face of life. Human
sees both wrong and right in life. Fighter develops and becomes wise with
training not only physically, but also develops his knowledge.
1Q – black-red line – After human goes this way for long years he looks back and
sees everyhing’s been gained at the cost of his soul, health and most importantly
his life. Fighter also sees he’s sacrificed his life to become wise when he looks
back to the years he trained.

Psychological condition of fighter plays a great role. Psychologically strong fighter wins over enemy, however the enemy can be physically strong.
Old conceptions affect to the preparation principles of fighter so much.
Let’s look at this psychological factor widely:
Thought is like water. In ancient times they used to pay much attention when they taught martial arts. Old conceptions greatly affected for perfect preparation of fighter. When opponents came to face to face, this kind of psychological preparation manifested itself.
What is the importance of it? It’s important that the fighter’s thought must be smooth and calm like water. Like on the water it’s seen the reflection of all surrounding objects, the fighter will see and control all movements of his enemy with a quiet mind, too. There’re some movements that the opponent doesn’t show them, but the fighter already feels and sees them with a calm mind.
If there’re waves on water, then it’s hard to see the reflection of objects. Human is also like that. If fighter’s mind is confused and only thinks about attacking or defense, then he can’t control the movements of his enemy. In this condition, the enemy gets a chance. Now he thinks about different and suitable attack. Thought is like the Moon. It shines everywhere like the Moon. The fighter’s mind must be so bright and quiet that he can possibly be aware of all movements and thoughts of his opponent. If the fighter can develop these features in himself, then he can quickly react to every mistake of his opponent. And it’ll cause to win over him. Despair and anger close fighter’s eyes and mind like clouds cover the sky. As a result, fighter can’t make a right choice and hardly apply tricks.
Will and mind must unite in one point. We can take talking on the phone as an example. Analogically “physical power” can be meant the person who is talking on the phone and “volition” can be meant electrical current. It doesn’t matter how sensitive the talking person is, if there’s not any electrical current, there’ll not be any communication. As a result, there’ll not be any conversation. There are some rough manners in life. We can talk a lot about rough manners. I’ll shortly explain you 3 basic methods.
1st method: To reckon with yourself and humiliate others.
2nd mehtod: To withdraw in front of others in every work and every time.
3rd method: Not to care about others’ interests considering only your interests.
We can talk too much about psychology, but fighter must know one more thing – Never do to others what you suppose bad for yourself, too. “Get away from pomposity, it’ll take you to abyss.”