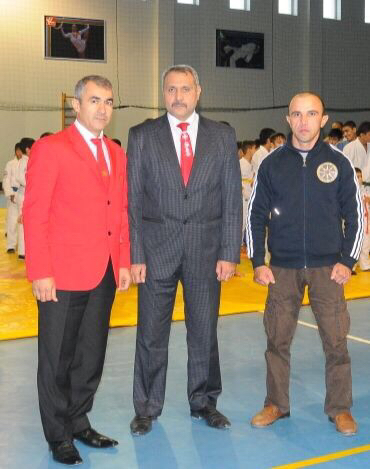 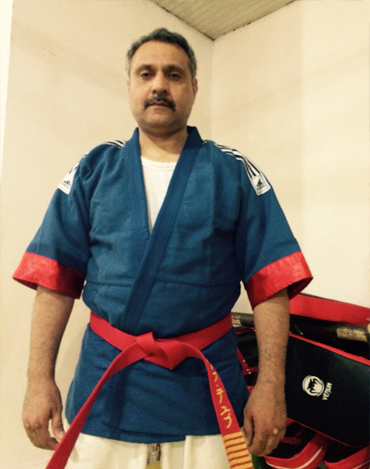 I appreciate your interest for our kind of sport. Let me introduce myself. I’ve been going in for professional sport since 1985. Kyokushinkai Karate became my lifestyle. I consider Kyokushinkai Karate one of the best kind of fighting, but I treat other kinds of sports and fightings with respect and interest. Today, there are lots of various kinds of sports and fightings in the world. For example: Kyokushinkai, Shotokan, Sumo, Sambo, Judo, Wrestling, Hand-to-hand combat, Freestyle battles, etc. Every kind of sport has its own techniques, philosophy, interest, requirements, rules, mastery, borders, etc. I thought a lot about it and took a decision based on my experience – I have to found a new, interesting, powerful and developed kind of sport. I named it “Jiyutaido”. Its meaning is “way of freestyle fights”. We can call it a “freestyle” kind of sport, too. When I refer to “Jiyutaido” as a powerful kind of sport, I mean:
• Psychological preparation
• Philosophy
• Basic techniques
• Physical training
• Strict finghting rules

Why specially in Japanese language?! Because I am the student and follower of Sosai Masutatsu Oyama. Masutatsu Oyama is the teacher and master of all Kyokushin world. That’s why I found this kind of sport in terms of japanese terminology. I established “Jiyutaido” on the basis of Kyokushin Karate and Azerbaijani wrestling. I added my own tricks into them. “Jiyutaido” means “free”, in other words, those who are going in for other kinds of sports can try themselves as well in this sport without any difficulty. “Jiyutaido” is a democratic sport. In this kind of sport, there are 2 versions:
“S” version – incorporates elements and rules of kinds of fighting+wrestling. “T” version – incorporates elements and rules of kinds of boxing+wrestling.
These two versions are interesting enough.
“Jiyutaido” – spread in many countries like Russia, Latvia, Azerbaijan, Iran, Tajikistan, Kyrgyzstan, Turkmenistan, Afghanistan, Georgia, Iraq, Turkey within a year due to its uniqueness, technical basis and power. I believe that after 10 years “Jiyutaido” will unite a lot of sportsmen in hundreds of countires. The sportsmen of other kinds of sports or fightings can try themselves in “Jiyutaido”, too. Because the rules are pretty easy. However, I’ve found this kind of sport for 10 years, but I’ve promulgated it for a year. Now “Jiyutaido” can get into the act as an official federation (Internation Jiyutaido Federation). I believe that the kind of sport I founded, first of all, will serve for health of nations, true lifestyle, inter-nations friendship, tranquility and growth of young generations. I am ready to talk and hold a discussion to those who are interested in this sport regardless of their kind of sport. We can do it on our website or via email. I believe the progress of “Jiyutaido”! I reckon this kind of sport will be called as the sport of 21st century. I’m pretty sure about it! I hope “Jiyutaido” will be an example for world sport!